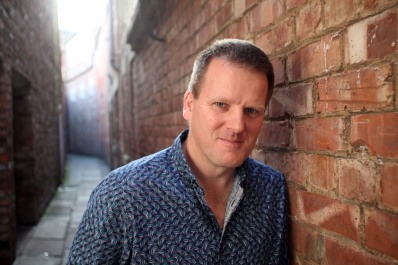 Welcome, Miles! Thanks for coming by to talk with us today about your work, especially your latest novel, Howl: A Small and Heavy Adventure. Those who follow this blog will remember reading my review of Howl: A Small and Heavy Adventure.  For those who haven’t, you can read my review here: https://kendraolson.wordpress.com/2016/01/07/review-of-howl-a-small-and-heavy-adventure-by-miles-salter/

Firstly, how did the story come about?

About six years ago, I was at home one day and I had this little moment of inspiration. What if I could write an updated version of Little Red Riding Hood, but with a modern flavour? That was the start. It was very much influenced by some of Roald Dahl’s writing. I wanted to write a book for kids that they would love. The book I would have loved when I was ten years old. But it took six years to finish it, mainly because I kept changing it as it went along. The wolf became a werewolf and the ‘Grandma’ character changed into Mrs Winters, the mysterious old lady in the story. I must have written  60,000 words but the final thing is only about 30,000 words. I am pleased with it, though, and I think I’ve kept to the spirit of that initial idea – a fun story with a frisson of something scary. The reaction from kids has been fantastic, so far – it really works as a kids book, which is great.

Have you always enjoyed writing or is writing something you came to as an adult?

I’ve always enjoyed it, but in a strange way, the better you get at writing, the harder it is, because you become much more self-critical as time goes by. I still enjoy it but writing a long project is a kind of work. You have to be very self-disciplined to make a long piece of writing hold together. It’s much harder than it looks. Apparently Fred Astaire once said of dancing:  ‘If you don’t make it look easy, you’re not trying hard enough.’ (Or words to that effect.) And that is exactly right – to make it seem casual, you have to work really hard!

All kinds of things. Friends. Good conversation. Bruce Springsteen. Bob Dylan. Van Morrison. Great writing. Funny stuff – old comedy things like The Young Ones or Monty Python. Tintin. Sacred places. The outdoors. A walk in the woods. Train journeys. Sunsets. Films. Poetry. At the moment I’m listening to a CD of Dylan Thomas reading his work from the 1950s. It’s on when I’m in the car and it’s fantastic.

I understand that you do a lot of work with schools. Could you tell us a little about this? Did your experience of working with children in a school environment help you with the writing of Howl?

I’d been doing creative workshops in schools for a few years, and kids kept asking me what books I had written. I’d written two books of poetry and a book for Young Adults, so I was really keen to write a book for the 8-10 age group. I’m doing quite a few schools things this year so I’ll tell them about the new book. When I asked children why they liked a particular book they often said ‘Because it’s funny’ so humour was really important to writing ‘Howl’ – it had to be as funny as I could make it.  So yes, the work in schools was a big help.

You’ve also written a series of picture books called Zip and Pop, as part of a medical research project with Queen Mary University in London. Could you tell us a little about how you became involved in this project and the purpose of it?

A friend of mine sent me a link to a job advertisement. Queen Mary University in London were looking for a writer and researcher. It was an unusual project. They wanted to research children’s bedtime routines, and I had to write some children’s stories that would encourage kids to brush their teeth. So as a team, we came up with these fun stories involving two frogs called Zip and Pop, and they had various adventures. They were always brushing their teeth. I was pleased with how the books came out. And I made some new friends – Sai Pathmanathan, the researcher, became a friend, as did Olivia Boutrou (the illustrator) and Niall Sweeney, the designer. Niall had a wicked sense of humour, we had these hilarious conversations about what diet the frogs should be on. The books were circulated in schools in London, where the research took place. I have a few copies of the books at home. The books haven’t been made available to the wider public. We also made a DVD with animations on it.

Writing for adults you can do much more in the way of characters’ lives, atmosphere etc. With children, you have to be more direct. Children aren’t so interested in ambiguity.

What are the greatest challenges in writing for a young audience?

There was a superb article written by Michelle Paver, the children’s writer, which appeared in The Writer’s Handbook in 2011. Michelle wrote about how hard it is to write for children because young readers won’t tolerate getting bored. You can get away with stuff for adults that you can’t with children. Before Howl was published, one publisher suggested we take out nearly 10,000 words. It was hard to take, but I think in the end it made it stronger. Waste nothing. Cut, cut, cut. The same is true of poetry and journalism. Know what you want to say, and say it. Roald Dahl’s work is impressive here – he keeps it pithy, and he’s always in control of the material. The story must skip along when you are writing for children.

Your website states that you are a ‘writer, musician and storyteller’. Do you see these roles as going together? How does music enter into it?

I’m lucky that I get to do lots of things around communication. I do often think that I should do one thing very well, rather than several things, but I enjoy the variety. I adore music, and play gigs with friends when I can. When I was younger I wanted to be Bruce Springsteen but the job was already taken! Yes they do go together. I take the guitar with me when I go into schools, and sometimes do gigs with poetry and music.

Could you tell us a little about some of your other books?

My first book was ‘A Song For Nicky Moon’ which was self published in 2010. It was shortlisted for The Times / Chicken House Children’s Writing Award in 2010. Only 100 copies were pressed and it’s not currently available. I’ve written two books of poetry – The Border in 2011 and Animals in 2013 – both with Valley Press. Howl is my most recent book.

Are you working on anything at the moment?

I’ve just started working on a follow up to Howl, as people are already asking me when the next book is coming! Also I’ve been working on a book for Young Adults, but it’s not ready yet. I’m hoping to finish it in 2016…everything takes an age!

Do you have any advice for budding children’s writers? Or indeed, children who would like to learn to write?

It’s not complicated. You only have to do two things: read a lot and write a lot. Immerse yourself in books. Read all the time, and lots of different things – fiction, non-fiction, poetry, journalism, short stories. Everything! And write as much as you can. It could take a long time to become a decent writer, so be willing to keep going, and keep going, and keep going! Start young! The younger the better. So many writers were bookworms as kids, or at least they were interested in books.

Thanks so much for taking the time to come and speak with us about your work. Best of luck with Howl: A Small and Heavy Adventure, and with all of your projects!

Kendra, thanks so much, it’s been great!

Firstly I would like to thank Miles Salter for the opportunity to read this in exchange for my honest review.

‘I do apologise, Mr Grindell,’ said Ms Lipps. ‘Most of our children are very good, but we do have one or two who can be a little bit…challenging.’

When class 5D at Rigor Mourtice Community Primary gets a new form teacher for the remainder of the year, James Small and his best friend, Neville Heavy, know they’re in trouble. But then, they always are. Even still, their new teacher, Mr Grindell, is particularly suspect, with his long yellow teeth and hot temper. Grindell isn’t too find of his class either.

Shortly after Mr Grindell takes over, James’s father is called on to take a temporary engineering job in France. While his father’s travelling for work is no longer unusual to James, on this occasion his mum will be accompanying him. Although his parents will only be away for two weeks, this feels a very long time to James. His younger sister, Emma, will be staying with a friend while they’re away. As Neville’s mum has just had a new baby, James will have to stay with an elderly childminder named Mrs Winters instead. She’s a total stranger to him as well as being a strange woman in her own right. However, James can’t help but soften towards her when he is offered a huge slice of homemade chocolate cake, before being shown Mrs Winters moped. But who is Mrs Winters really? And why has she asked James to keep an eye on Mr Grindell?

This hilarious adventure story for children aged seven through ten will appeal particularly to boys, especially those who, like Small and Heavy, may occasionally be seen to be slightly challenging. Salter has a keen eye for children’s speech and thought patterns and is convincing at writing from a young child’s point of view.

Howl: A Small and Heavy Adventure is available now from Amazon UK and Amazon US: http://www.amazon.co.uk/gp/product/0993300014